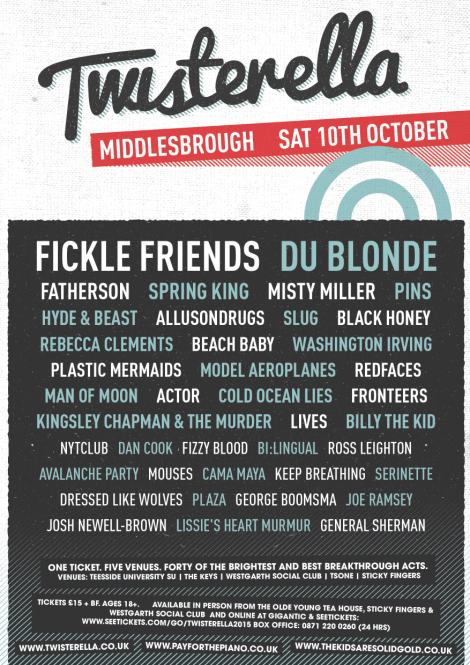 Launched in 2014, Twisterella Festival is the creation of Middlesbrough’s most dynamic and forward thinking independent music promoters, Pay for the Piano and The Kids Are Solid Gold.

Centred around the University area of town on Linthorpe Road & Southfield Road, the 1000 capacity metropolitan festival utilises well established music venues such as Teesside University Students’ Union, The Keys and The Westgarth Social Club, to name but a few.

The event is designed to showcase the brightest emerging national and international music talent and also give a platform to a select number of local and regional acts who are ready to make the step up to the big stage.

In addition to the live acts, Twisterella features an Unconference with the focus on bringing key music industry figures to the town to share their expertise and offer advice to new and developing Teesside musicians.

The promoters involved in Twisterella both have a long history of attracting breaking acts to the region, having previously secured Teesside shows from the likes of Mumford & Sons, The Vaccines, The 1975, James Bay, Catfish & The Bottlemen, Palma Violets, Frank Turner, First Aid Kit, Dry The River, Daughter, Pulled Apart By Horses, Drenge, Wolf Alice, Alt-J, Keaton Henson, Temples and many more earlier in their careers.

As part of the continuing development of Teesside bands, 2015 saw Twisterella begin a band-exchange partnership with the 10,000 capacity ‘Olgas Rock’ festival in Middlesbrough’s twin town of Oberhausen in Germany. To kick off the partnership, Teesside band ‘Mouses’ played two sets at Olgas Rock and in return, Oberhausen indie-pop group ‘Cama Maya’ will be heading to Twisterella.