Bruce Dickinson on the noise restrictions at Hyde Park 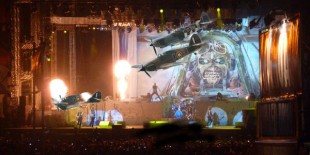 Live Nation previously struggled with noise restrictions at London’s Hyde Park having famously cut short Bruce Springsteen’s set in 2012 when the singer broke curfew, and it now seems Iron Maiden frontman Bruce Dickinson is not convinced that the noise restrictions at the inner city outdoor venue have been banished since AEG took it over for the British Summer Time concerts this year.

Dickinson, who staged a reconstruction of a World War I dogfight over AIF member festival Sonisphere’s festival site last weekend said that the stage is still too quiet for Iron Maiden, although Black Sabbath made the decision to headline the Saturday of British Summer Time:

“We considered playing Hyde Park again. The thought of filling central London with Iron Maiden fans is brilliant”, Dickinson told The Daily Star. “However, the noise restrictions at Hyde Park are so silly. If somebody has a loud conversation you have to shush them. Sabbath made their decision, but we looked at it and thought it’s too tame”.

Iron Maiden headlined the Saturday night at Sonisphere last weekend, pulling in the biggest crowd of the festival and stating that this was the final night of their three year tour.