Bestival breaks world record for the largest ever disco ball

You may remember that the king of disco himself, Nile Rodgers, set Bestival’s Rob da Bank a challenge at the beginning of the festival season, to create the world’s largest ever disco ball. See the video below.

True to his word, Rob da Bank and the Bestival team set to work, and the gigantic mirror ball was hauled up into the air by a huge crane as Headliner Chic took to the main stage at Bestival last night. A Guinness World Book of Records judge announced that the mirror ball had in fact broken the previous world record for the largest ever disco ball at 10.33m in a diameter, just inching ahead of the second largest that came in a whole 0.45m less. 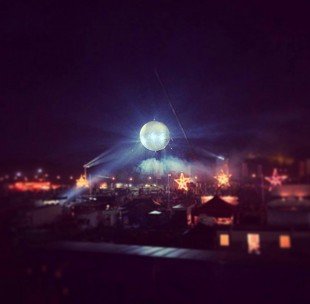