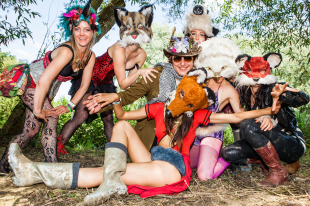 Taking place on Monday 30th October at DEPOT in Cardiff, this year’s winners will be announced during a sparkling awards ceremony hosted by Glastonbury Festival’s Ben Challis, as part of the AIF’s yearly flagship event.

This year, there are eight awards categories, designed to recognise the hard work and success of the very best events in the industry, including ‘New Festival on the Block’, ‘Unique Festival Arena’, ‘Mind Blowing Spectacle’ and ‘Live Act of the Year’.

The Festival Congress will be introducing a new Pioneer award for 2017, in order to recognise and celebrate the work of an individual in the festival world who has pushed the medium forward, creating new frontiers through their event.

The inaugural Pioneer award will be given to Secret Garden Party’s Founder and Head Gardener Freddie Fellowes. Fellowes is a founding AIF member whose event drew to a close this year after inspiring the UK festival scene with its multi-arts, participatory approach for 15 years.

The Act of Independence award will this year go to Greenbelt Festival for their work with Amal and their new Muslim artistry venue and programme, as well as their focus on Palestinian festival programming to mark the key anniversaries in Israel-Palestine this year. This is an extension of the festival’s long-term commitment to highlighting human rights issues in the Middle East conflict through artistry, ideas and activism.

The Cineramageddon area at Glastonbury, ‘Happy Kanye’ micro venue at Bestival, Mirracocco Luminarium at Bluedot, Cinderella’s Motel at Standon Calling, Womb With A View at Shambala and The Outlands at End of The Road are all up for Unique Festival Arena award this year.

Frank Carter & The Rattlesnakes, Yonaka, IDLES, Oh My God! It’s The Church and Loyle Carner are all nominated for Live Act of the Year award.

Those in the running for other categories this year include the likes of Victorious Festival, Boomtown Fair’s ‘Sector 6’ area, Beyond the Tracks and Samphire Festival.

AIF General Manager Paul Reed said: “The Independent Festival Awards will celebrate the energy and creativity coursing through the independent festival sector. We’re also extremely proud to this year acknowledge Freddie Fellowes as a truly inspirational pioneer who has contributed to the evolution of independent festivals on numerous levels with Secret Garden Party. We look forward to another memorable awards and party in Cardiff”.

Secret Garden Party Founder, Freddie Fellowes said: “It is fantastic to be chosen as the first pioneer. Thank you AIF. SGP has been one massive adventure for all of us involved and it is on their behalf that I accept it. It has been one hell of a roller-coaster ride that has shown me more love (and sometimes tears) than I ever thought possible. But every ride should know when to stop: it is a great privilege to be able to wrap up this project, letting it remain unspoilt in our memories and hopefully inspire other people to pioneer as well. The frontier always moves, so let’s keep it moving”.

The Awards will be followed by a dedicated aftershow party at The Big Top Venue, 10 Feet Tall in Cardiff.

This year the Festival Congress is expected to play host to over 400 delegates, and will be centred around the theme of ‘Pseudoscience’. The first day of events will take place within the spectacular surroundings of National Museum Cardiff, while the second day will be hosted at the Wales Millennium Centre (WMC), featuring a packed day of panels and workshops entitled ‘Festivals Under the Microscope’.

Attendees include notable festival organisers from the likes of Glastonbury, Bestival, Boomtown Fair, Kendal Calling, Shambala, End of the Road, Liverpool Sound City and many more.

Tickets for the two-day conference and awards are now on sale, priced at £100 for AIF members, £135 to Friends of AIF and £200 general sale exclusively through headline event sponsor The TicketSellers.

PlayPass are the exclusive RFID partner for the Congress and BIMM will again be the lead educational partner, with Help Musicians UK the exclusive charity partner.

The Mirracocco Luminarium at Bluedot

Womb With A View at Shambala

The Outlands at End of The Road

Live Act of the Year

Oh My God! It’s The Church

Festival Caterer of the Year (in association with NCASS)

New Festival on the Block