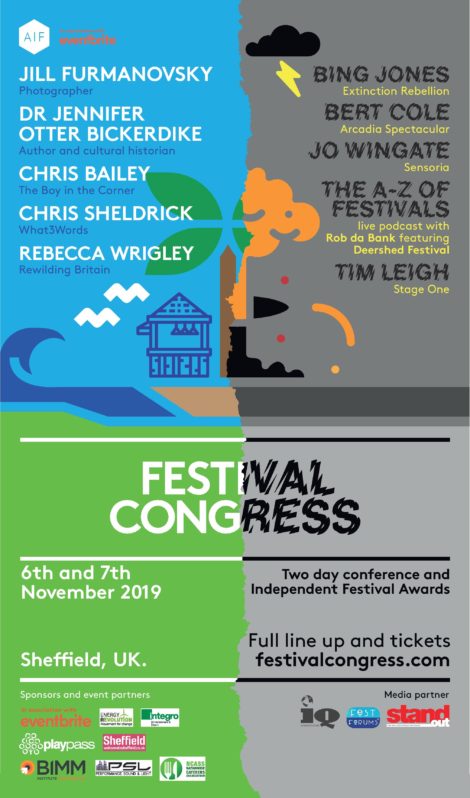 Today we have announced further details for the 2019 edition of our flagship Festival Congress event in Sheffield on November 6- 7, featuring a two-day conference and the Independent Festival Awards.

The Independent Festival Awards will again take place at 92 Burton Road – a warehouse venue that is well known for its ‘Peddler Night Market’ events – and will feature décor and theatrical elements inspired by this year’s theme of ‘Utopia And Dystopia’.

Confirmed speakers include legendary rock photographer Jill Furmanovsky in conversation with ILMC MD Greg Parmley. Furmanovsky has photographed the likes of Oasis, Pink Floyd, Bob Dylan and Blondie across a 40-year career, in addition to extensively covering Glastonbury festival, and will be talking through some of her defining images.

Also confirmed is Rob da Bank’s A-Z Of Festivals podcast, which will be recorded live, featuring AIF member Deershed. In addition, Bert Cole of performance art collective Arcadia Spectacular will deliver a closing keynote documenting the transition from their Spider structure to their Pangea installation at Glastonbury this year and the ‘Arcadia Reach’ project.

Elsewhere, Rebecca Wrigley, Chief Executive of Rewilding Britain, will deliver a quick-fire talk about her organisation’s mission and the importance of rewilding; and Jo Wingate, Founder of Sensoria Festival, will talk about their immersive screening of Fritz Lang’s ‘Metropolis’ with a live score from Factory Floor on the site of a former steel mill. Chris Bailey (Boy in the Corner) will deliver a quick-fire talk about the power of radio and podcasting for festivals; and Tim Leigh of Stage One, which has delivered productions for the Special Olympics opening ceremony in Abu Dhabi and Mercury Music Prize, will talk about creating spectaculars and the curse of innovation.

Panel and workshop sessions at Festival Congress this year include a headline debate around what ‘independence’ means in the current festival climate, a vision for a sustainable industry, festival funding, apps and the ethics of data collection, digital marketing impact, licensing, cashless technology, managing volunteers and more.

Festival Congress is also set to be the first travel carbon neutral events industry conference, working with Energy Revolution to balance the carbon emissions from travel for all speakers and staff with investment in projects that create clean renewable energy. Delegates will also be offered the option to balance their travel emissions with a donation at point of ticket sale – with 100% of all donations going directly to renewable energy projects.

AIF CEO Paul Reed said: “Following an exciting inaugural year in Sheffield, Festival Congress has firmly settled into its new home and is back with our most ambitious and varied programme to date. We’ll be debating the key issues currently facing the independent festival sector and, as ever, looking outside of the industry for inspiration. With Abbeydale Picturehouse, we’ve found a conference venue that is aligned with the content and Independent Festival Awards in terms of creativity and atmosphere. In addition, as part of our commitment to environmental change, and following our Drastic On Plastic and Take Your Tent Home campaigns, I’m delighted that AIF is working closey with Energy Revolution to walk the walk and be the first transport carbon neutral event industry conference.”

Festival Congress is again supported this year by Sheffield City Council, with tickets on-sale now, priced at £100 for AIF members, £135 to Friends of AIF, £185 to non-member organisations and £235 to non-member suppliers through headline event sponsor Eventbrite.